We have now completed the first stage of the Northern Tablelands Koala Tracking Project. Thank you to everyone who participated by letting us know when they saw a koala. As well as recording new sightings of koalas, collecting DNA samples and observing koalas in the wild, we were able to closely observe 12 koalas on ‘Newholme’, UNE’s property near Mt Duval. We caught 6 koalas and fitted them with GPS tracking collars, then recorded their location over several months. This information enabled us to see how big an area koalas use and what sort of bushland they prefer. Most koalas used an area approximately 1 x 1km (100ha), while one male koala roamed over 400ha. We also recorded a female koala going on a 6km hike in a very short time. The map below shows where these animals moved over these months. Each colour represents a different animal. 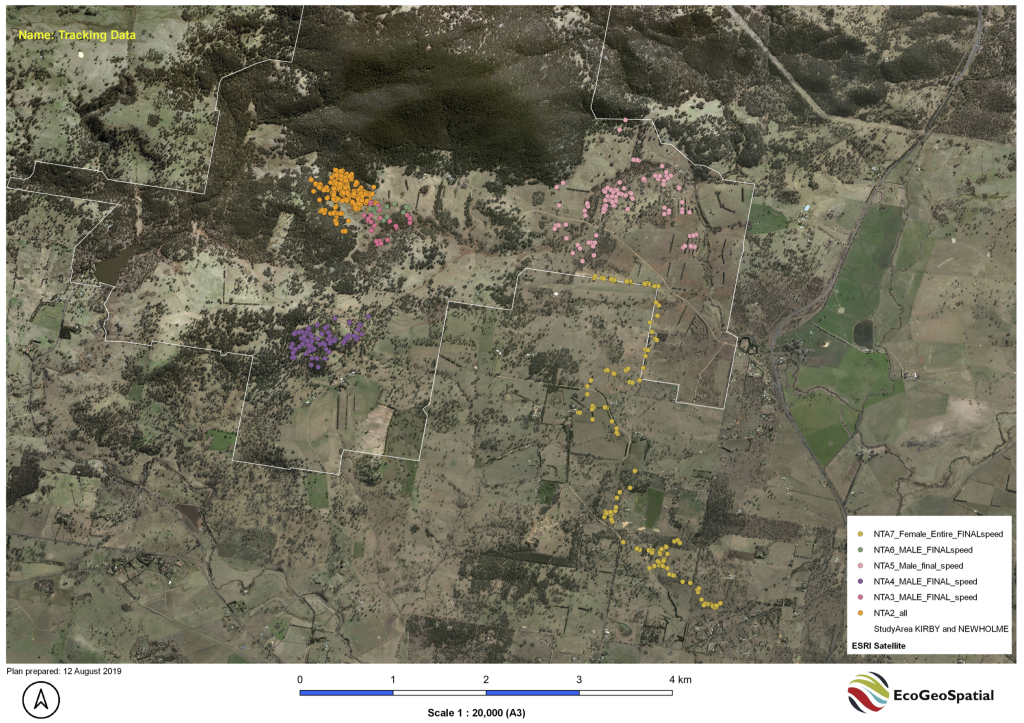 We will post the final report here when it is available. We are now continuing this project to the north-east of Armidale and are looking to people living in this area to help us again.

This project is now complete. It ran from June 2017 to August 2019. We asked people to report koala sightings in an area between Armidale and Inverell and then we visited the site, observed the koala, noted the vegetation and collected koala poo for DNA analysis. The information gained from the survey will tell us about koala distribution and the health of animals in this region. The project was funded by the NSW Government Office of Environment and Heritage through the Saving Our Species program. It is coordinated by Stringybark Ecological and includes researchers from EcoGeoSpatial, JML Environmental, The Envirofactor, the University of New England and Department of Primary Industry. Southern New England Landcare assisted in collecting reports of koala sightings.

Koalas are listed as ‘vulnerable to extinction’ under both NSW and Commonwealth environmental law. They have declined in numbers due to habitat loss, predation by dogs, vehicle strike, fire and climate extremes. The Northern Tablelands may be an important refuge for this iconic animal, but we don’t know a lot about them in this region.