Northern NSW is home to a unique ecological community: Semi-evergreen Vine Thicket (or SEVT). A type of dry rainforest, this community includes a rich diversity of plants and animals. 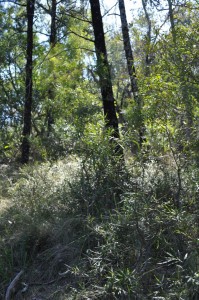 SEVT is often dominated by Notelaea microcarpa (Native Olive) and Geijera parviflora (Wilga) and usually has a low tree layer, a dense tall shrub layer and a dense ground layer, often dominated by Carissa ovata (Native Grape). Tall emergent trees such as Eucalyptus albens (White Box), E. melanophloia (Silver-leaved Ironbark) or Casuarina cristata (Belah) may also be present. SEVT is an endangered ecological community that occurs in south-east Qld and northern NSW. In NSW its is usually found on the western slopes of the Great Divide, with good stands in Kaputar National Park and around Gunnedah, Bingara, Warialda and Yetman with outliers as far west as Bellata.

You can see some photos of this community and the plants that occur in it on my Flickr site at https://www.flickr.com/photos/stringybark_ecological/sets/72157651306515862/.